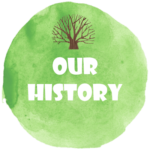 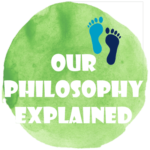 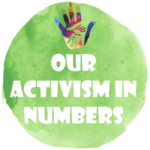 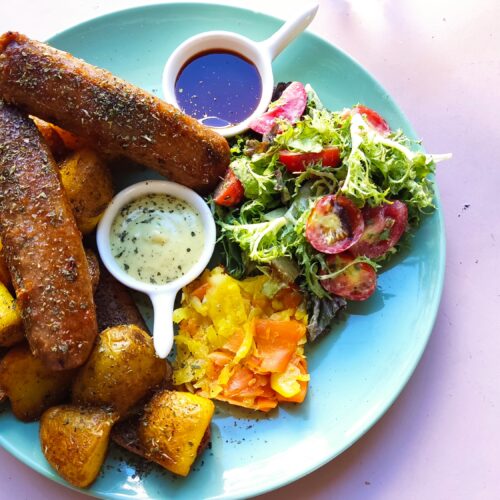 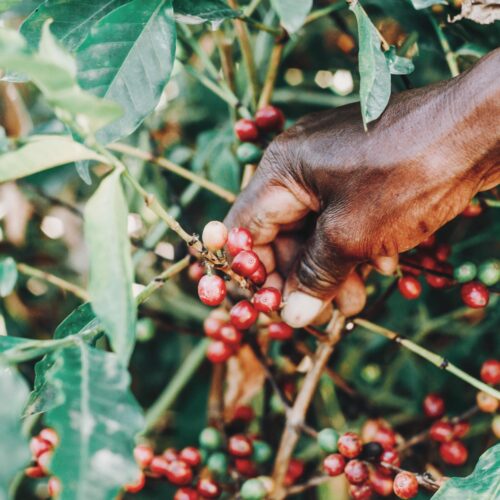 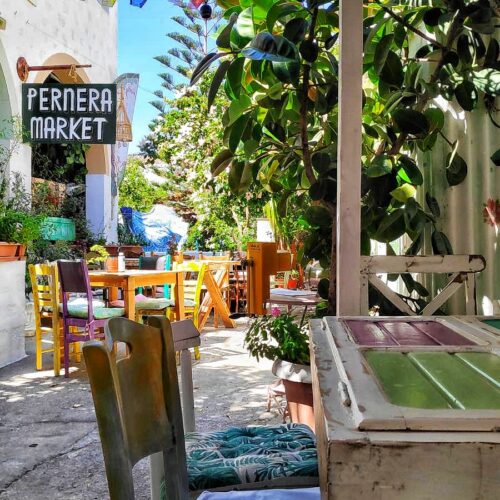 Veganism stands for our planitary companions, all earthlings, as animal liberation. It stands for a million reasons more but putting an end to cruelty is its most important one.

Fair trade stands for our species’ companions; human liberation. Human slavery, even if hidden, still survives in many places of the world. In other it thrives. For some goods, such as cocoa or coffee, its more like the rule than the exception. Vegan diet is also fancy these days isn’t it? A lot of people will pass by our place. We want to get our visitors informed, so that they can make conscious choices thereafter.

Upcycling stands for the opposite of industrialization. We act naturally. We collect, reshape and reuse whatever can still be used. We are not buying new things when we can avoid it. Therefore factories work less and less. I have heard and read: On a simple life-style, the whole humanity would be able to live satisfying, comfortable lives, just with the things thrown away at the garbage places. – Plus upcycling reduces the costs of constructions, making creation process available for any human being. -Anyway, nature is upcycling

Local organic foods and ingredients stands for minimum transportation of goods around the globe ,meaning minimum fuel consumption and working hours spent,goods deliverred to people who would not have them and would not need them, anyway. With an exception for coffee and cocoa which will be offerred in their fair-trade version, plus some goods which are not grown in Greece, due to commercial purposes, even if they would easily be grown and produced, suçh as millet and lynseed, in our vegan restaurant on Patmos island, you will not be served mangos, papayas, pine-apples, cashew nuts etc. We have such a big diversity of plant goods to pick from in our part of the globe, really!

Consuming as a form of activism

Our Ideology in numbers

….Here is a small introduction of ourselves . If you want to learn more, come visit us.

I was born in Istanbul, Turkey. I became vegetarian at the age of 13, inside a hospital in Istanbul when during a small laser operation, I clearly caught the smell of grilled meat and soon realized in terror that it was my burning skin! I never ate meat again since that time! Allmost all of my life I remember my self cooking meals for my friends and co-crew. After my first trip to India, I decided to make cooking my main profession. First as a volunteer in 'Shambala camping' in south Turkey , I prepared meals for thousands of people. I turned into veganism in 2010. After that, I cooked professionally for many restaurants and eateries in the touristic town of Kas, I travelled back to India where I created my own restaurant in the city of Goa and was invited to join one of the biggest festivals in the world 'O.z.o.r.a festival' where I cooked for 40.000 people, veganized traditional turkish and greek food. Last but not least, I moved to Greece one and a half year ago with the intention to stay, and found a job in the vegan restaurant 'Mama Tierra' in Athens, where I met with Nicolas! Soon after, an opportunity rose to start our own small business on Patmos, the island of the Apocalypse!.

I was born in Athens, Greece and at the age of 19, vegan philosophy and ethics adopted me! In 2014,from Dunedin of New Zealand, I embarked on a small commercial marine cargo ship of 45000 tons as an apprentice engineer, (accompanied by a luggage full of dry beans, nuts and oatmeal!) for ten months. Since that time, I have volunteered on various sectors such as natural farming, upcycling constructions, children's education, cooking food for people on the street. All this time cooking has been my way to persuade people to change their approach to all earthlings and the environment. I worked for two and a half years in Mama Tierra, one of the best vegan restaurants in Athens. There I met Gozde, who had just moved her life from Turkey to Greece to find a job in a vegan or vegetarian restaurant!